ICO Rating Website – icorating.com has been charged by the SEC for failing to disclose the revenue from “paid for ICO reviews“. Recently, the SEC has begun an aggressive crackdown on ICOs which raised huge amounts of money during the 2017-2018 bull run. These fines could extend to other websites and exchanges which charged the ICOs for reviews and top listing.

The SEC pursued a cease and desist order against the Russian owners of the website. According to the filings, the SEC finds the website in violation of the ‘anti-touting’ policy which the SEC had earlier issued a warning for. The website owners (Respondents in the case) have been accused of not disclosing the payment received for promoting ICOs which, many of which are financial securities.

The law not only seeks to punish the seller or creators but also portals that were involved in the promotion of the sale. According to the SEC, the paid promotions require proper disclosure for the investors.

In anticipation of the move by the authority, the firm offered a monetary settlement to the Authority; which it accepted. The total fine charged by the SEC is $268,998. 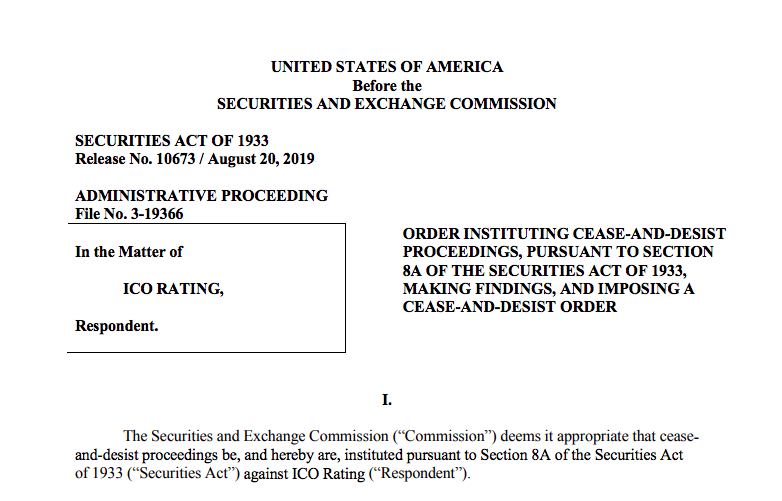 The court filing by the SEC noted,

ICO Rating’s research reports, ratings, and social-media postings publicized offerings of blockchain-based digital assets, including “tokens” or “coins” that were investment contracts, which are securities pursuant to Section 2(a)(1) of the Securities Act

The above-mentioned violation puts a lot of ICO projects at a huge risk. There were more than 1700 of similar ‘investment contracts’ offered during the 2017-2018 crypto-frenzy.

Moreover, even if they do not close down the project altogether,