Real Bitcoin volume is exploding as seen in Bakkt, fueling the crypto rally

Real Bitcoin volume is exploding as seen in Bakkt, fueling the crypto rally

The daily volume of the Bakkt Bitcoin futures market has been on a consistent rise since mid-January. Despite the criticism of the recent rally by some investors who call it an attempt at manipulation, data shows that real volume is on the rise.

When volume rises in tandem with the market, it often indicates that the upsurge is backed with strong momentum. 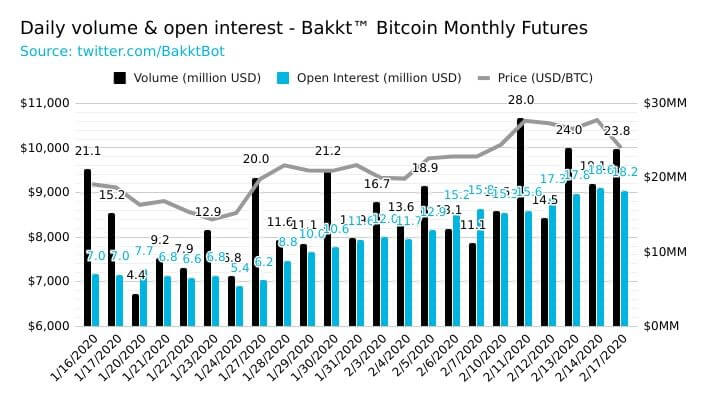 The increase in the volume of Bakkt, as well as other strictly regulated futures platforms including CME Group, show that the demand for Bitcoin from both retail and accredited investors is rising.

Although most of the volume in the cryptocurrency market when the bitcoin rally was just getting started came from margin trading platforms in the likes of BitMEX, over time, spot and futures volume grew.

The expansion of legitimate volume in the cryptocurrency market provided both Bitcoin and altcoins such as Ethereum with a more solid footing to resume a bullish market structure.

In the short-term, traders remain divided on the price trend of Bitcoin. The volume of the dominant cryptocurrency is increasing, and technical indicators like the golden cross of the exponential moving average (EMA) show more upside potential for BTC.

In the past 24 hours, the entire cryptocurrency market has consolidated following a major rally on February 15.