Everybody knows that one day Bitcoin mining will eventually cease, and the last coin will be mined. The date for this is expected to be around the year 2140. So what could an investment of $100 now be worth in 120 years time?

Bitcoin to the Moon

To estimate the price of Bitcoin well into the future we need to take a look at growth models for the cryptocurrency. The two most well-known are Parabolic Trav’s Parabolic super trend price growth model, and Plan B’s Stock to Flow price model (S2F).

We’ll also have to take into account that if hyperbitcoinization does occur, and Bitcoin becomes global money used by everyone, and no other kind of currency exists at all, there are still limits to Bitcoin’s price growth.

Hal Finney predicted Bitcoin to have a price of 10 million per coin back in 2009. In Finney’s estimate he simply took the estimates for world household wealth and divided it by 21 million coins.

He arrived at $10 million per coin. Decrypt revisited the idea, and recalculated with updated numbers and came to a price of $18 million per coin. Bitcoin’s parabolic growth can only keep rising until there is no more wealth whose value can be converted to Satoshis.

Parabolic Trav’s parabolic super trend model closely correlates with Plan B’s stock to flow model. While many investors discount the idea of parabolic growth, Bitcoin has already grown 2,232,111,011.11% since Marti Malmi sold the first Bitcoins for fiat currency in 2009, to its all time high of $20K in 2017. 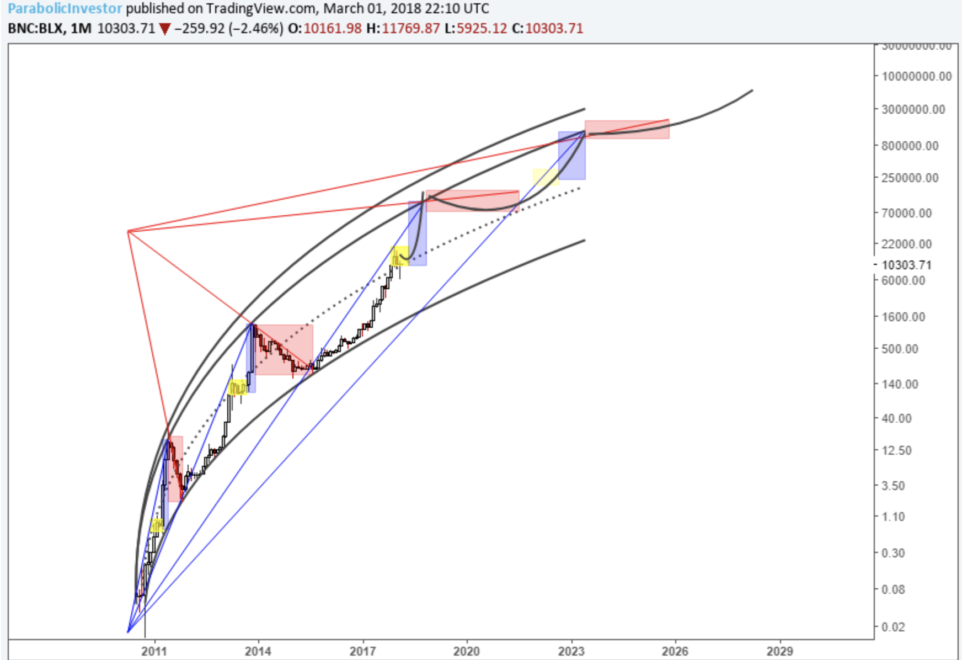 Bitcoin follows an S-curve of technological adoption, because while it is a “currency” it is also new technology,