EOS, the delegated Proof-of-Stake platform, may be losing its edge despite a $4 billion war chest. According to a new report by DappRadar for January, the number of users dropped by a massive 67% from January 2019.

This is startling, and hints of trouble within the platform’s hierarchy that promised so much and yet deliver too little.

1There are some quarters who even complain of a broken dPoS system which couldn’t justify the huge sums of ETH crowd funded in their year-long ICO.

It must be noted that within that period, Ethereum and Tron posted decent activity.

In January, the same trend continued with Ethereum and Tron strengthening their bases while EOS’s declined.

An extract from the report reads:

“There are some surprising numbers when measuring the performance of the three blockchains. Daily active unique wallets for Ethereum have increased by 82%, TRON rose by 33%, while EOS was facing a decrease in daily active users by 61% comparing January 2019 data to January 2020.”

“In January 2020, Ethereum and TRON increased their user bases while EOS had a steady decline.” 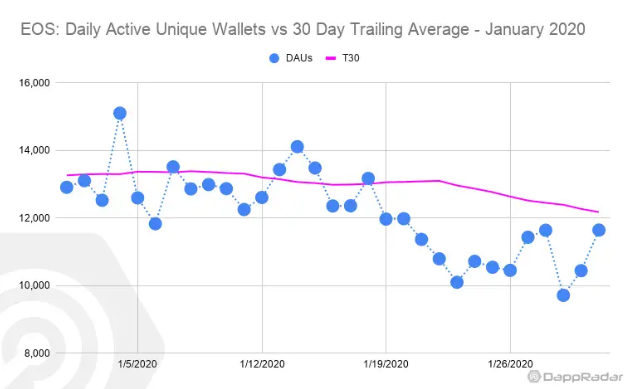 EOS may be ranked higher according to previous China’s Center for Information and Industry Development (CCID) reports but the report also found that Ethereum’s DeFi, and not surprising decentralised marketplaces/exchanges were growing at a steady pace,