The combined trading volumes from Ethereum-based decentralized exchanges (DEXes) rose 53% to an all-time high of $668 million in March 2020. This is according to analytics from Dune, an analytics platform.

Interest in DEXes on the rise

At the time of writing, the total trading volumes from DEXs stood at slightly over $9 million, pushing weekly volumes to $70.7 million.

Combined, this is down 54% if measured as a trailing 7-days growth.

The three most active DEXes are OX, Kyber Network, and Uniswap, drawing over $6 million in USD terms.

This finding is consistent with a parallel finding from DappRadar that confirmed that Ox, Uniswap, and Kyber Network were the most active.

To be specific, OX had over $3.1 million worth of digital assets traded in the last 24 hours. This represents a market share of 33 percent, almost twice that of Kyber Network which stood at 17.7 percent. 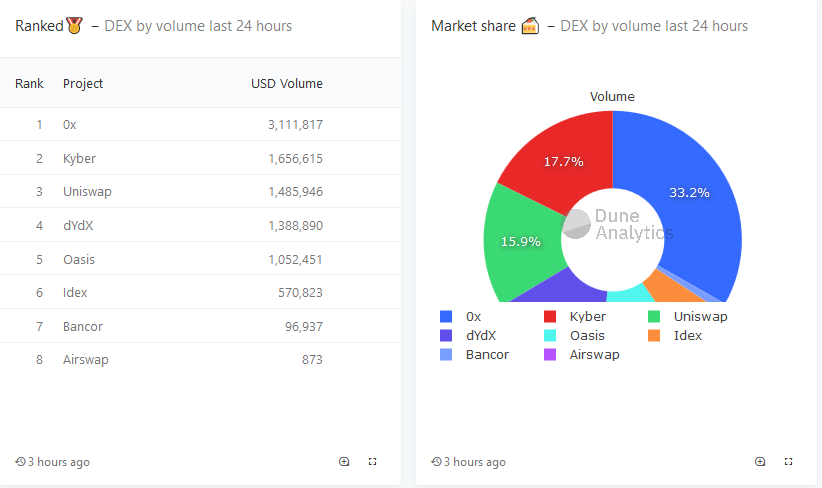 However, the most interesting observation was the consistency of DEX trading. Over the last year, its growth has been linear and positive sloping.

For example, over the last nine months, volumes have almost doubled from $289 million of July 2019 to $668 million by the end of March.

“DEX volumes landed at an all-time high of $668 million for March! Up 53% from last ATH in February. Interestingly, it’s the first time DEX volumes are soaring on a falling ETH price.”

DEX volumes landed at an all-time high of $668 million for March!📈 Up 53% from last ATH in February.

Scroll for more
Tap
Github is backing up the codebases for Bitcoin Core and Ethereum under the Arctic ice in Svalbard
Ethereum Foundation and Vitalik Buterin Cancels Serenity, Realigns with Bitcoin