The Cardano (ADA) network has seen its network activity steadily rise this year, with metrics such as the number of daily active addresses, the total number of addresses, and the number of transactions all going up. According to data from IntoTheBlock, the network reached its ATH with almost 10,000 active addresses on Feb 12, which is a 319 percent increase since Jan. 1, 2020.

The Cardano network is thriving with a huge increase in activity

After years of research and slow development, the Cardano network is now closer than ever to being open for business. The launch of the incentivized testnet for the Shelley era of the Cardano blockchain incited a lot of the Cardano community to take action and participate in the network, leading to its immense success.

As time goes by, more and more users seem to be flocking to Cardano—2020 looks like it’s going to be a breakthrough year for the promising blockchain project.

According to data from IntoTheBlock, the blockchain has been thriving this year, seeing almost every network-related metric go up since the beginning of the year. In a Feb. 17 tweet, the company showed that the number of daily active addresses on Cardano reached their all-time-high on Feb. 12 with 9,760 addresses. This, the company said, represents a 319 percent increase from the 2,330 addresses that were active on Jan. 1.

Graph showing the number of daily active addresses for the Cardano network since Jan. 1, 2020 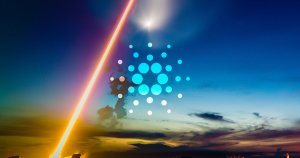 The active address ratio on the Cardano network has seen a 231 percent rise from the beginning of the year.