This Exchange News was brought to you by OKCoin, our preferred Exchange Partner.

Although Bitcoin’s market capitalization is still extremely small compared to that of other assets, like the dollar or Apple, the cryptocurrency is rapidly gaining traction with mainstream investors.

Paul Tudor Jones, a multi-billionaire hedge fund manager, called BTC the “fastest horse” in the asset race, noting how the cryptocurrency looks like gold did in the 1970s, prior to an exponential rally.

And now, Bloomberg Intelligence senior commodities strategist Mike McGlone is weighing in, giving a confluence of reasons why he and his desk believe Bitcoin’s rally is supported and could just be the start of a greater move higher.

While the S&P 500 has surged since its March lows, Bitcoin is largely outperforming the stock index, “showing divergent strength versus the wobbly stock market.”

WIth BTC managing to retake key resistances like the 52-week moving average and $8,000 while the S&P 500 falters, McGlone wrote that “BTC appears to be functioning less as a risk asset, and more toward an alternative store of value like gold.” 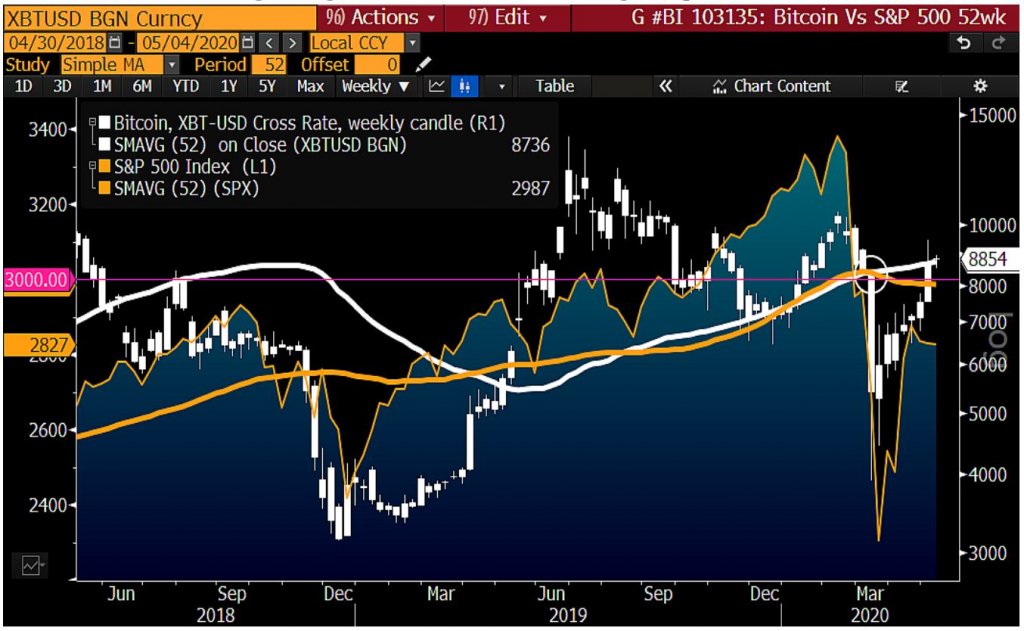 Chart from Bloomberg. It was created prior to the move to $10,000, but the point remains.
Reason #2: Bitcoin’s volatility is dropping as stock volatility rises

In a similar vein, McGlone noted that Bitcoin’s volatility has “never been lower versus the stock market, favoring price appreciation” in BTC should historical trends hold.

Scroll for more
Tap
Michael Novogratz: We should be valuing Ethereum like Wall Street values Facebook:
Is 10% Fall in Bitcoin[BTC] Prices Just A Pull Back Or A Signal For Downward Trend?