The crypto exchange ecosystem is becoming increasingly cutthroat as major players fight to win the largest share of the market. Bittrex is one exchange right now that appears to be losing the fight.

US crypto exchange, Bittrex, has been losing significant ground to rivals over the past couple of years. So much so that even a series of recent airdrops, promotions, and fee discounts have had little effect on its diminishing market share.

In partnership with CryptoQuant, Bitcoinist has been delving into the data to bring you this exclusive report on the current situation on the 2013 founded, Seattle headquartered exchange.

By the end of 2017, Bittrex was one of the world’s top crypto exchanges with almost 40% of the total exchange inflow market share. Since then, things turned south during the 2018 bear market and the platform never really recovered from it. 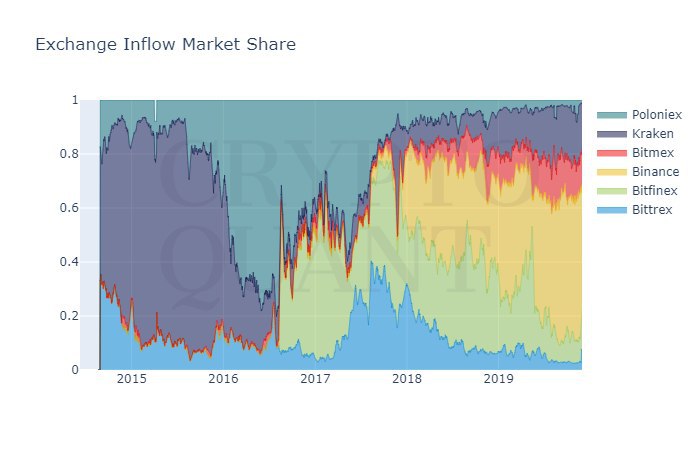 According to the CryptoQuant team,

Since 2017, Bittrex has been one of the exchanges that has struggled the most to maintain its market share during the bear market. Its BTC inflow share fell from a high of 88 percent at one point to now being down around 2%.

Binance exchange, lead by Changpeng Zhao, started to gather momentum in 2018 despite the icy climes of crypto winter, and has since grown to consume almost 50% of the entire market share.

This has had a devastating effect on the likes of Bittrex, Poloniex and Bitfinex, which have lost out big time to the yellow beast.

Kraken has made a minor comeback in recent times, and BitMEX has gained some ground too, but the scene today is largely dominated by one player. Unless radical measures are taken to woo clients back from Binance,