Coinbase’s new research report dubbed, “The United States of Crypto,” gave the community an insight into growing crypto-awareness in the USA. This report was validated by the fact that recent Google Trends data suggested that search interest for Bitcoin surpassed the likes of several A-list celebrities, including Kim Kardashian.

Other click-bait phrases such as ‘royal wedding’ and ‘election results’ also tanked, when compared to the world’s largest cryptocurrency by market cap. However, what is particularly striking are the search results for Donald Trump, against Bitcoin. Bitcoin dominated U.S President Donald Trump, with respect to Google search queries, over the week. And, while President Trump’s search queries briefly peaked on the 4th of July, Bitcoin was quick to overtake the commander-in-chief again. 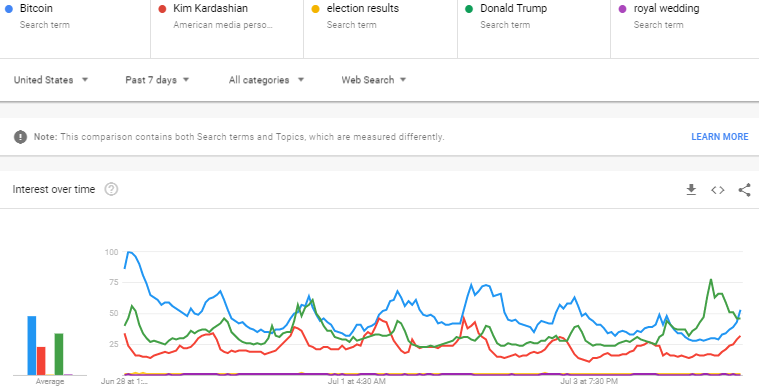 In another comprehensive report by The Tie, a significant percentage of tweets about Bitcoin, 38.9%, came from the US alone. Out of the said percentage, 61.5% of all Bitcoin tweets were found to be positive.

Tweets surrounding Facebook’s hyped Libra coin accounted for 43.8%. However, 54.8% of the same was reported to be negative. Libra coin tweets were noted to be more positive in the UK, which stood second in terms of global distribution of Bitcoin tweets. The Tie also reported that 10.5% of all BTC tweet volume in the UK, including posts involving Libra coin, were the most positive.

Notably, countries plagued by uncertain regulatory climate such as the US and France had the most negative tweets about the upcoming stablecoin, Libra.

The US also dominated tweets relating to Chainlink, accounting for 53%. Chainlink received massive spotlight after its native token, LINK, rose by over 300% in just a fortnight. LINK skyrocketed by another 104% after the Coinbase listing announcement.