Bitcoin whale growth is macro bullish, but will it be enough to stop another massive selloff?

Bitcoin whale growth is macro bullish, but will it be enough to stop another massive selloff?

Data suggests that large buyers – sometimes referred to as “smart money” – have been in full Bitcoin accumulation mode over the past couple of months, with the number of proverbial “whales” hitting multi-year highs just in the past week.

From a macro perspective, this data metric is offering significant hope to investors, as it signals that one of the benchmark cryptocurrency’s most important investor groups is optimistic that the crypto will eventually see an upside.

However bullish this may be in the long run, it still doesn’t negate the fact that the crypto has shown signs of technical weakness throughout the past couple of months.

The decline was seen on March 12th – a day now referred to by investors as “Black Thursday” – rocked the crypto markets, leading to widespread capitulation amongst retail investors while also flushing out the vast majority of the crypto’s margin traders.

This decline was not enough to rock the core of the cryptocurrency’s investor composition, as so-called “whales” began accumulating Bitcoin at a rapid rate in the time immediately following this event.

This occurrence is clearly illustrated by data offered earlier this month from blockchain analysis platform Glassnode, showing that the number of Bitcoin whales hit 2-year highs just over a week ago.

“The number of BTC whales continues to grow, hitting 2-year highs – the last time we saw this many during an accumulation phase was in 2016. This becomes interesting when we compare it with the last Bitcoin halving.” 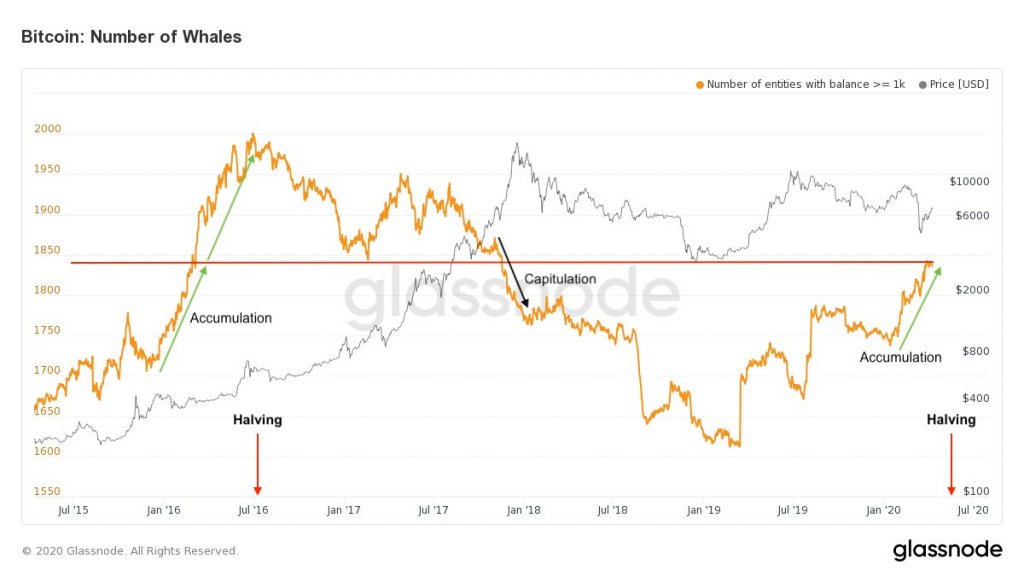 Image Courtesy of Glassnode
Will this be enough to give Bitcoin a much-needed near-term boost?  » Read Full Article «

Scroll for more
Tap
Bitcoin Price Analysis: Why BTC/USD Rebound Above $7,000 A Hot Potato?
6,800 then 8,000: Traders Lay Optimistic Bitcoin Predictions Ahead of Halving