Bitcoin price finally crossed the barrier at 7,000 and extended the bullish action above $7,200. The return of the bulls in the American session followed a technical breakout above a key 61.8% Fibonacci level taken between the last swing high at $7,292 to a swing low at $5,849. The surge to the weekly high was rapid just as the immediate reversal currently testing the 61.8% Fibo support level.

At the time of writing, Bitcoin is trading at $6,804 after a 0.01% subtle loss on the day. The Asian session on has remained largely bearish but increased volatility is expected in the European session as the bulls focus on pulling the price above $7,000.

The major task for the buyers is to defend the support at the 61.8% Fibo if not above $6,800. The immediate downside is also supported by the accelerated trendline (broken). The 1-hour chart shows the price significantly above the moving averages; whereby the 50 SMA at $6,553 and the 100 SMA at 6,457 are in line to offer support as need arises. The widening gap between the 50 SMA and the 100 SMA suggests that buyers are in a position of influence compared to the bears in spite of the retreat from the weekly high. 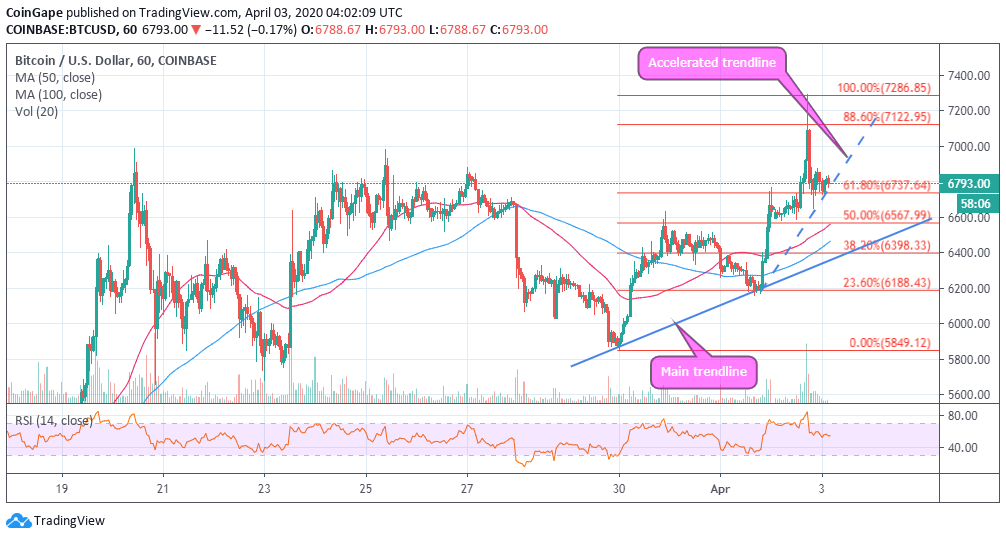 Other technical indicators such as the Relative Strength Index (RSI) have begun to range in support of a consolidative movement.