Bitcoin Price Analysis: BTC On The Verge Of A Major Correction To $9,000

Bitcoin Price Analysis: BTC On The Verge Of A Major Correction To $9,000

Bitcoin rejection from the levels almost at $11,000 was a big blow to the bulls who are currently feeling very demoralized. The surge to highs around $10,949 was an attempt to push for a second leg up after Bitcoin stepped above $10,700 yesterday. The initial leg from $10,200 was not without a fair share of struggle with $10,400 acting as a key hurdle.

At press time, BTC/USD is teetering at $10,701 (on Coinbase). A building bearish momentum shows that the bears are taking over control of the price. It should be noted that the bulls have dominated the trend since August 15. 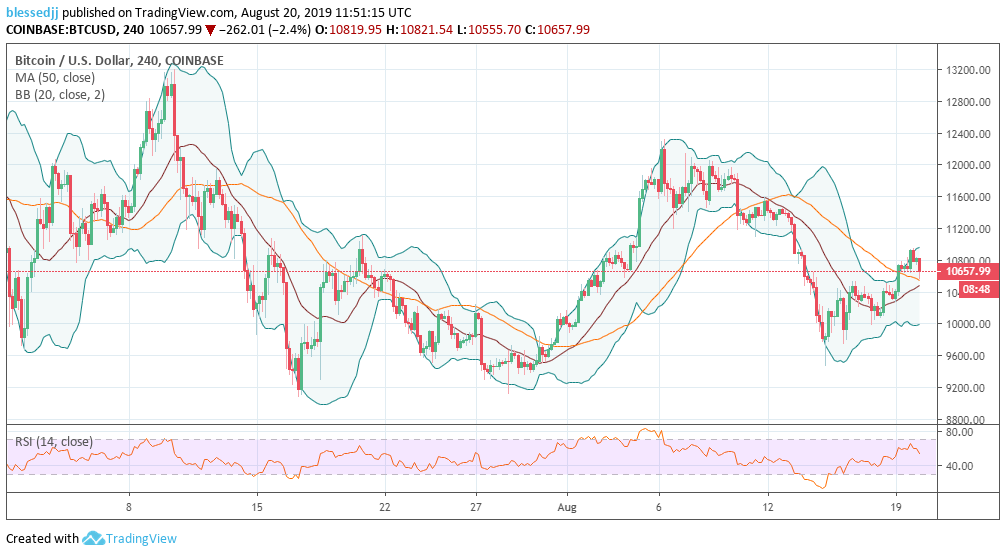 The staged uptrend spiked further on breaking above the 50 Simple Moving Average (SMA) 4-hour. Unfortunately, the bears took advantage of the failure to correction above $11,000 to force Bitcoin against the key vital support areas heading towards $10,500.

The prevailing trend, is strongly bearish as observed using the Relative Strength Index (RSI). The indicator continues to retreat towards the average at 50. The Bollinger Bands show that volatility is slightly higher today compared to yesterday. The Bollinger Band Middle curve 4-hour is likely to offer support in the event declines breach 50 SMA tentative support area.

If Bitcoin is to realize gains in the coming sessions, it must defend the short-term support at $10,600. A break above $11,000 will encourage the buyers to increase their positions and propel Bitcoin to higher levels.